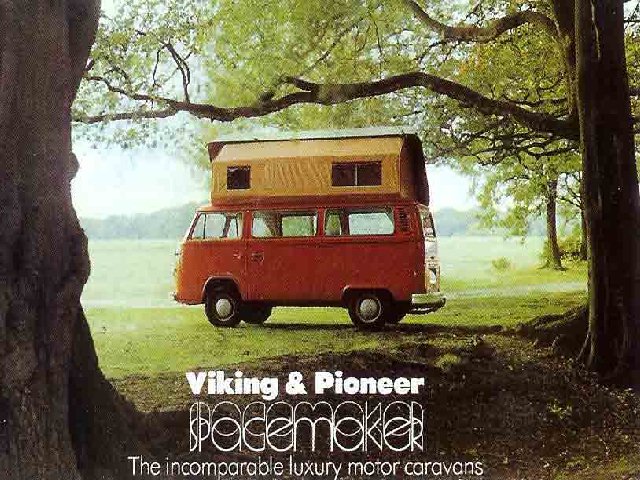 Viking roofs originated in the early 1970s in Hertfordshire by a company called Motorhomes International, competing with VW licensed conversion companies Devon and Westfalia. They later moved to Standbridge, Bedfordshire. Motorhomes International produced their signature Viking roof on Bay window buses with full length, side hinged elevating roof. There were 2 styles: the standard Viking and the later-launched Spacemaker (or SuperViking) roof.

In the standard Viking roof, fold out bunks were incorporated into the roof, attached to the fibreglass roof on the driver’s side and on the passenger side, attached to the bar that pushes the bellows outwards. Bunks were unrolled and then clipped onto the U brackets.

The original Viking roofs had bellows in brown material with two clear windows. Curtains could be attached with velcro.

The SpaceMaker/SuperViking was the premium option with a solid bed which slid outwards, pushing the roof bellows outwards creating in total 4 fixed beds. Vikings are known for spacious sleeping areas which were comfortable for adults, unlike other makes with tighter sleeping space.

Even during the 70s with the huge popularity of the campervan, Volkswagon didn’t factory produce a Type 2 camper, they were all converted by companies such as Viking, Devon, Danbury, Westfalia and Dormobile. Often Viking simply fitted their pop-up roofs to existing converted campervans.

The early 70s Late Bay’s style and safety updates (such as square bumpers, updated grill, larger engines and crumple zone introduced) were further improved at the end of the 70s with the launch of the new T3 (called the T25 in the UK).

The T25 was the last of the rear-engined VWs and was a larger, heavier, more square shaped vehicle - this much more 80s-looking van was nicknamed ‘The Brick’ for obvious reasons! Companies were converting T25s into campers with more luxurious features such as fridge, stove, swivel seats and of course pop-up roofs, including Viking continuing to install its standard and SpaceMaker versions.

With VW restricting licensing on conversion companies there was a bit of a battle in the 1980s. In David Eccle's book 'VW Camper - The inside story', he quotes a Viking press release of the time:

"The Viking invaders have arrived. The biggest battle in motor caravan history has begun. It will be hard. It will be long. And you are a witness. Viking Motorhomes on one side; Devon and Westfalia on the other. David and Goliath all over again. You were born to be free. Your freedom gives you the right to choose. Before you buy, insist on seeing a Viking. We'll send a Viking to your door. If you're sure it's what you want we'll build one just for you. One more Viking on our side. One more blow for freedom."
(With thanks to thesamba.com forum for information)

Viking were a popular but not VW-licensed company (though there was never any evidence regarding negative issues with quality or safety), and in the 1980s Viking eventually ceased operation.