The Dormobile and the Canterbury Pitt 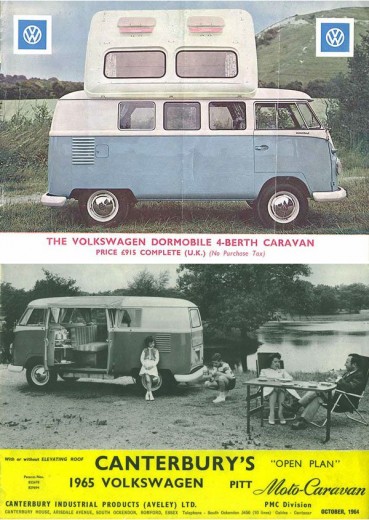 Dormobile are one of the most well-known names in camper vans and still produce their roof design today.

The forerunner to the Dormobile company started as Martin-Walter, which originated in the 1770s as harness, and subsequently, carriage manufacturers. Fast-forward to the 1950s when the new Bedford CA van arrived and Dormobile (now Dormobile (Folkestone) Ltd) launched its signature roof, a side lift roof with 2 opening air vents and 2 glass windows in the top of the roof which provided 2 pull out bunks (and subsequently grew larger with bunk bed options).

The model grew from a need recognised by the company, who noticed that traders were putting cushions into their vans and taking the family out for the day. With bench seats for sleeping and a fitted cooker as well as the breakthrough roof design, these vehicles meant motorcaravanning became an attractive lifestyle option.

Peter Pitt had designed some camper interiors as the Pitt-Moto caravan Company, before merging with Essex’s Canterbury sidecars in 1961, where they produced the Canterbury Pitt. Canterbury Pitt produced 1 style ‘the Rising Sunshine Roof’ - a spring loaded straight lift pop top which fitted on both split screen and bay window made from glass fibre or aluminium with canvas side fillers. It provided the most room of all the straight lifts and lifted twice as high as the Devon or Danbury, although only provided 2 hammocks.

The background at this time is that the UK tax authorities had asserted that converted vehicles were a form of estate car, and therefore the retail price should bear passenger car purchase tax, a tax from which vans were exempt. However, manufacturers negotiated an agreement whereby Dormobile converted vans could be sold without purchase tax, provided they incorporated (the dramatic sounding) ‘built-in life support equipment’ such as a cooker and facilities for washing and storing clothes.

A law was eventually passed to exclude campers from the category of commercial vans, meaning legally, the camper was now on a par with a private car. This new status gave the campervan broader appeal and created a substantial lifestyle market at the time when the 1960s saw a substantial increase in disposable incomes.

Canterbury Pitt Conversions continued on the newly-introduced bay window van in 1967, but when Peter Pitt died in February 1969, the franchise to produce his designs ceased. Pitt held all the rights, which were not transferable and Canterbury Pitt Motor Caravans discontinued VW-based conversions.

Dormobile conversions were completed on almost every model of commercial chassis including VWs. However, the 1970s and 1980s saw a struggling UK economy, plus the popularity of cheap package holidays, and several conversion companies were adversely affected.

Dormobile Ltd was bought in the early 2000s by SHB Hire Ltd who now specialise in supplying spare parts to the original Dormobile vehicle market, plus the production of the classic lifting roof for Land Rovers and VW camper vans plus interior conversion and furniture installations.